I suppose my parents never loved me enough. To think that they actually made me study in high school, made me go to several practice SAT/ACT tests (that took place on Saturday mornings) and force me to join the National Honors Society, just so that I could walk away in the top 11% of my class - screwing me over from a full scholarship and into a pitiful one and only getting me into a decent, but unremarkable state college while I work two jobs to keep myself out of debt. And to think, this whole time, they simply could have paid someone anywhere from 15,000 to over a million dollars so that I could lie and get good test scores, win games in sports I don't know one thing about, and become President of some club to boost my admissions into colleges.

Seriously, one of the faked scores was 1420. The SAT scores out of 1600. If I'm paying you a hundred grand to make my kid look smarter, they better damn well score in the 1500s. Although CNN claims that parents only paid a measly 15 - 75,000 for better test scores, so I guess you get what you pay for.

College and exam administration, coaches at some of the top colleges in the US, exam proctors, and rich parents surprised no one at all when the news broke that the Department Of Justice was investigating their fraud to get their spoiled, precious babies into top universities. Parents paid to bribe SAT/ACT admin to either let someone else take the test or adjust the scores afterword, some even faked disabilities so that the student could have extra time/help with the tests. They would also buff up the resumes of potential college dropouts by creating fake backgrounds in sports and other extra-curriculars that look good. They photoshopped their shitty child's face onto other athletes bodies- which is just another thing I can't even deal with. Anyway, they finally got caught, and apparently this counts as a felony so there are people being charged with things like mail fraud and identity theft / fraud.

You may think I'm being harsh towards these innocent children who totally did not realize that something fishy was going when mommy told them they didn't have to take the SAT and also if anyone asks, you were in varsity football and partially blind. Rich kids have always gotten into great colleges, certainly other people have found that fishy, right? According to the New York Times, a study found that: "At 38 colleges in America, including five in the Ivy League - Dartmouth, Princeton, Yale, Penn, and Brown - more students came from the top 1 percent of the income scale than the entire bottom 60 percent." Now, obviously I'm not implying that all these rich people cheated to get in - the more expensive a college is, the less poor people are going to be able to get in. Just because you got accepted into Yale doesn't mean they are going to pay for you to go there, so yeah- the scales would be skewed towards the intelligent upper class. But honestly, considering the type of people that have been uncovered in this plot, celebrities and corporate bullies - known for their ability to understand how they are not the center of the universe, I have no doubt that there are a lot more that haven't been caught. 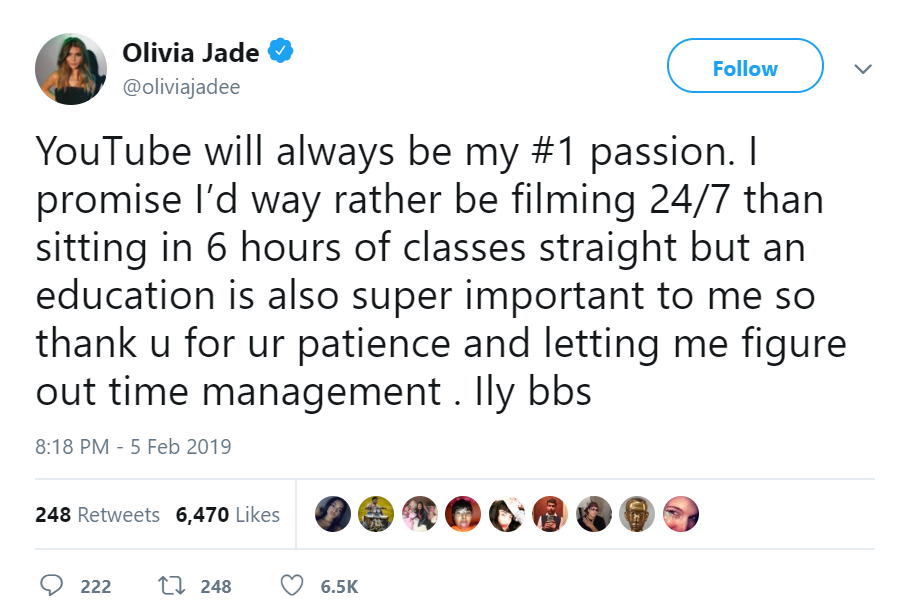 This girl doesn't even appreciate that her parents frauded her way into college. Poor thing just wants to be a beauty guru!