Obituary for Opportunity, the Mars Rover 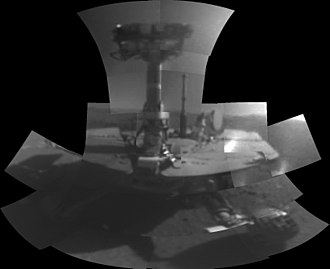 Opportunity "Oppy" MER-B, age 15, was announced dead on Feb. 13, 2019 by NASA. Opportunity was born from the brains of NASA scientists, before she was launched into space. She landed on the Meridiani Planum Jan. 25 2004, and she spent the rest of her life on the red planet. Opportunity was an accomplished scientist, herself along with her sisters helped discover that water was once present on Mars. Opportunity discovered the presence of hematite, and Heat Shield Rock. She analyzed several craters and traveled in total 28.06mi (45.16 km). Oppy was caught in a dust storm and lost contact with Earth back in June 2018. She entered a hibernation mode in hopes that it could reboot once the storm had passed or that the coming wind could clear out any intruding debris. This was unsuccessful. Opportunity never reestablished contact. NASA declared her mission complete in February 2019. She survived for 15 years on the red planet, when originally it was believed to be just 90 days. Preceded in death, her sister Sojourner (passed away in 1997) and twin sister Spirit (passed away in 2011). She is survived by younger sister Curiosity.

Opportunity, Curiosity, Spirit, Sojourner, Explorer, Glory, Magellan, Pioneer, Voyager, Discovery. These are the soul of humanity. I get depressed sometimes, knowing that we live such short lives. That this is all there is. All the fighting and chaos in today's society. But space exploration is so much bigger than one person, than anyone. It is humanity's greatest legacy. Deep down, at the base of it all, what are we? Animals that create worse and worse rocks to fling at each other? Creations after God's own image? No - at the base of it all, humanity is survival. It is opportunity. It is spirit. It is hope, love, exploration, making our mark on this galaxy. Humans will not survive forever - but our legacy will live on. Perhaps some green, bug-eyed aliens will send their own probes into our solar system one day and they will see our ultimate legacy. All that will be left is the shadow of humanity we left on this earth, but they will see what we truly are as a species. Because outside our great planet shows our greatest accomplishments. On the Voyager we share images of science and culture, but in the names themselves we share humanity. We say: Hello! We are humans, we are explorers, we do not give up. We want knowledge, we want to travel the stars, we want to leave our mark. We are here, we are important. Welcome to our solar system! Of course you can stay awhile! We were earthbound once, and our young societies looked up to the stars and saw Gods. Now we see potential, an opportunity. To make a better future. And I think that's just wonderful.