What's the deal with the hats?

Why do people wear merchandise from political figures or controversial ideologies - don't they know they look dumb?

I'd say I'm a relatively political person. I think they're an important thing to think about every once in a while. But, for the life of me, I do not understand why people feel soooo damn strongly for a certain political leader or belief that they buy t-shirts and stickers boasting of their opinions. Merch feels like it should be for tv shows or bands not for the president. Do people buy MAGA hats because Donald Trump is so controversial or because they are genuinely so into all his policies? In regards to controversial merch, then yes, they want to start a fight. Why else would someone wear a shirt that says fuck the opposite political party, or something something, the other side are wrong look at my shirt with guns or a rainbow on it.

Baby's first word: "I'm an independent person, don't use me in your political protests to get fame on social media, I just want you to love me mom, why won't you just love me!" Look at it! Is it stupid or is it just me?

But what about something less controversial, like bumper stickers? Even those I personally find very odd. The only bumper sticker I have on my car is one for my university, and that's because it was free. Bumper stickers are permanent, those little shits do not come off, at least those yard signs can be taken down. To place one on my car, it would have to be something very important to me. Never have I cared about another human being that much to plaster their name on my vehicle, God forbid a political candidate that I've never fucking met. What even is the point of these things? To show off all your hobbies and opinions? That's what the internet is for - I'm driving right now, I don't care. There is also the social stigma around bumper stickers. If you have two or three, alright cool a little quirky, but if your car is covered in them, whether they're those coexist ones with all the religions or made of guns or a thousand 'proud dash hound mommy XD' you are crazy. Everyone thinks you are crazy and will avoid parking next to you. This is also, apparently only a phenomena here in America, in Europe nobody has bumper stickers. So perhaps this fun little treat that America was just another one of the fun thing we have that have been tainted by our wacko society. We can't have nice things.

Speaking of crazy people: please go on redbubble and look at the awful Clinton merch. 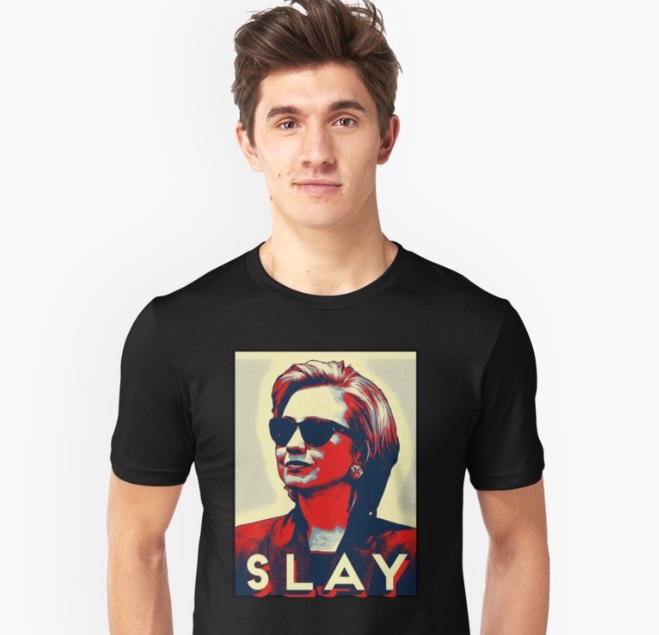 Honestly, like do hip millennials buy this because they think Chillary is 'fleek af'? These aren't even from her website, I can't blame her for this. Someone took time out of their day to design these. And they spend 20+ dollars on this shit. Anyone who wears shit like this, and thinks Chillary is genuinely hip and cool is retarded.

But, at least Trump's are all just dumb catchphrases of his or shirts that literally just post his tweets

I was surprised to find his much more tolerable. Probably because of the different bases. Hillary thrives on looking swag to the millennials, Trump is a boring old man who hangs with boring middle class adults.

The worst I could find are more about conservatives in general, more so gun control than the president himself, although Jesus those are awful too. Like, ok sir we get it, you hate minorities and abortions and love guns. Liberals are all snowflakes haha sooo funny sir, that's why you're so insecure about your penis you have a boosted truck and conceal carry in your front pocket. 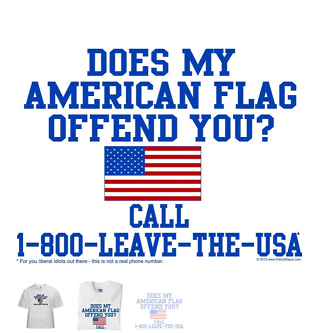 Quick side note - is anyone actually offended by the American flag? Is this about that whole kneeling thing? Aren't we over that? Did you know the Supreme Court case of West Virginia V. Barnette says it's unconstitutional to force children to salute the flag or say the pledge of allegiance in school. You'd think a group who loves the second amendment so much would understand the first. Oh well.

In conclusion - this article has derailed, just look at the dumb pictures and cry with me as our beautiful country burns itself to the ground. Bumper stickers are dumb. People who wear controversial and/or 'trendy' political merch are retarded and don't think for themselves; they are merely a part of the hive mind for their particular issue/party.